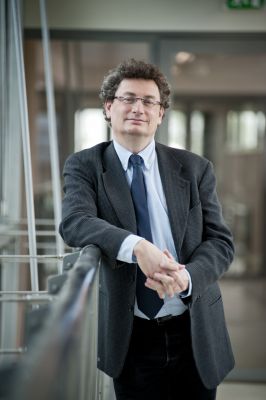 Gilles Salles, a university professor and hospital doctor (PU-PH), is an internally acknowledged specialist in haematological oncology, notably lymphomas. Along with Dr. Patrick Mehlen and Prof. Alain Puisieux, he is a founding member of the Synergy Lyon Cancer Foundation and a member of its scientific steering committee.

Gilles Salles fulfils his functions of Head of the Haematology Department of the South Lyon Hospital Complex and teacher at the Claude Bernard University of Lyon with passion.  He also directs the “Indolent B Proliferation” research team at the Cell Molecular Biology Laboratory (UMR CNRS/ENS/UCB 5239). “As a hospital university researcher-teacher, one constantly rebounds from one question to another”, explains Gilles Salles. “I see the patients, reflect on the innovative treatments that could help them, observe how these treatments act, imagine research programs to understand the factors of success of these therapies, and so forth. At the same time I teach this to the young researchers in the laboratory and the university. It’s wonderful to be able to position myself at every link of the chain”.

Haematology represents a specific and exemplary model in cancerology, on both experimental and clinical levels.

For more than 20 years, Gilles Salles has been particularly interested in lymphomas. This type of cancer develops from lymphocytes (the cells of the immune system) to the detriment of organs like the ganglions and bone marrow. He continues, “I chose haematological oncology because it involves at the same time the blossoming of knowledge, major scientific challenges and the management of patients in difficult clinical circumstances. It’s also in this key discipline that the first discoveries in carcinogenesis were made, such as chromosomal translocation and oncogenes, and in which new treatments such as kinase inhibitors and therapeutic monoclonal antibodies were developed”.

After obtaining a DEA degree in Differentiation, Genetics and Immunology from the Claude Bernard University of Lyon in 1986, Gilles Salles continued his university studies by graduating as a Doctor of Medicine in 1989, obtaining an Advanced Specialised Studies Degree in (DESC) in Cancerology in 1992, and writing an immunology thesis on the signals that regulate the formation of B lymphocytes in 1994.  During this period, he was a researcher at the Dana Farber Cancer Institute of the Harvard Medical School of Boston in the United States. He says that it was “an opening into the world of research in an exceptional environment, with the opportunity to approach renowned scientists and forge links through scientific cooperation that continues today”.

From 1996 to 2007, Gilles Salles chaired the Scientific Committee of the Adult Lymphoma Study Group (GELA) and still continues to provide this structure, since renamed LYSA, with elements of scientific orientation and organisation in lymphoma research in France and elsewhere in Europe.  He has been Vice-President of the Board of Research of the Hospices Civils de Lyon since 2010 and has been an elected member of the Medical Establishment Commission since 2003.