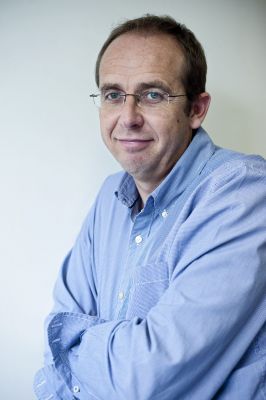 Patrick Mehlen devotes most of his innovative work  to understanding the singular properties of cancer cell survival. He is presently the director of the Synergie Lyon Cancer Foundation.

Communication between the cells of the organism and their environment usually occurs through “receptors” located on the membrane, capable of receiving specific signals, “ligands”. Although it has been established that receptors are only activated with their ligand, Patrick Mehlen proposed as far back as 1998 that some receptors function when the ligand is absent and that in this case, they order the cell to die: these are “dependence receptors”.

Since then, his team has identified most of the 15 known dependence receptors and has highlighted their role in the control of tumor development. However, they perceived that the cancerous cell succeeds in deceiving these receptors by producing the specific ligands for survival itself. Therefore Patrick Mehlen is now trying to design molecules capable of interfering with several of these ligands called autocrines to bring about the death of the cancerous cell. “We are currently in the steps of developing different candidate drugs”, explains the researcher. “I hope that in the next fifteen years, we can perform clinical tests of the first compound on patients, and if they are successful, carry on to the inhibitors associated with all the dependence receptors discovered. We can therefore obtain a range of targeted treatments”.

Patrick Mehlen is a former pupil of the Ecole Normale Supérieure de Lyon and holds a PhD in Molecular Biology. After studying the role of small stress proteins in cell death (apoptosis) at the Stress Lab of the CNRS, he spent one year at the Burnham Medical Research Institute in California in the framework of the “Aging and Cell Death” program. There, with Dale Bredesen, he formulated the concept of dependence receptors by performing research on apoptosis and neuronal migration.

From 1998 to 2006, he was in charge of the CNRS “Apoptosis and Differentiation” team at the Centre of Genetics and Molecular and Cellular Physiology (CG φ MC) of Lyon. In 2004, he brought his pool of researchers to the Léon Bérard Center (CLB) where he first managed the “Apoptosis, Cancer and Development” team from 2004 to 2011, then the Laboratory of Excellence DEVweCAN since 2012. In 2008, he founded the company Netris Pharma, which aims to use the concept of dependence receptors in an anti-cancer strategy. “In the beginning, I carried out research in order to understand, then little by little, I now carry out research to try and serve”, acknowledges Patrick Mehlen. He has been the joint manager of the Institute of Clinical Sciences at the CLB since 2009 and the Deputy Director of the Cancer Research Center of Lyon (CRCL) since 2011.