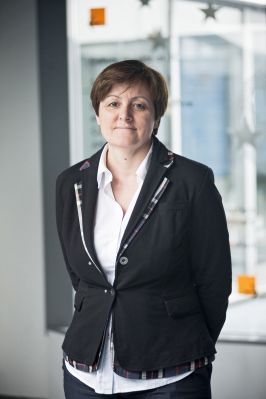 Sylvie Négrier, a clinician and scientist known worldwide for her expertise on kidney cancers, has been the director of the Centre Léon Bérard (CLB), since 2009. She is currently Board member of the Synergie Lyon Cancer Foundation.

In 2006, Sylvie Négrier held the position of assistant executive director of the CLB, and she already believed in the “Synergie Lyon Cancer Foundation” project, created following a call for proposals issued by the French Ministry for Higher Education and Research, the focal point being the structuring of Thematic research and healthcare networks (“Réseaux thématiques de recherche et de soins” or RTRS): “Even though the contest was highly competitive, we felt our project was legitimate and we were highly motivated by the funding and ‘title’ we would obtain. There was a strong consensus among the stakeholders about the objective of the project: to gather new skills, to implement value-added technological platforms and to speed up the decision making process in the Lyon region”. Sylvie Négrier was in particular responsible for initiating the C3D “drug discovery” platform, which “was the missing link between fundamental research and pharmaceutical industries”.

Progress, a stimulus and a driving force for scientists and doctors

In 1986, Sylvie Négrier received a gold medal during her internship in Medicine at the University Hospital Centre of Limoges. Following her Diploma of Advanced Studies (“Diplôme d’études approfondies” or DEA) in “Immunology, differentiation and genetics”, she graduated with a PhD in Medicine in 1988. Sylvie Négrier has invested as much of her time as possible in medicine, “simply to help others”, and has always tried to remain “at the forefront of research, where medical science develops continually, and where new frontiers are reached”. After having held a position of assistant Head of Clinic for the “nephrology, transplantation and immunology” clinic of the Edouard Herriot hospital in Lyon, she joined the oncology unit of the CLB in 1990. There, she specialised in metastatic kidney cancers. “Thus far, no appropriate therapeutic solutions existed for such serious illnesses, and then immunotherapy emerged”, Sylvie Négrier remembers. “Alongside this new development, a broader concept arose, namely that the natural immune system could play an active role in controlling cancers”. Owing to the fact that she is an expert in that domain, she has written many publications and has published many results in peer-reviewed international journals.

In 2002, Sylvie Négrier was appointed assistant director in charge of the medical department and clinical research of the CLB. “The organisation of an institute combining healthcare, research and innovation was a very interesting mission, which was a great success: in terms of the strategy for running the site, the level of activity and the layout of the facilities, since all aspects of the CLB have greatly evolved in a matter of several years!”. Currently University Professor and Hospital Practitioner (“Professeur des Universités-Praticien Hospitalier” or PUPH), Sylvie Négrier teaches oncology at the Claude Bernard University of Lyon 1 and also provides medical consultations at the Centre Léon Bérard. She has been the director of the Centre Léon Bérard since 2009, position previously held by Thierry Philip, and as such was the first woman in France to direct a Centre dedicated to cancer control.