The LabEx DEVweCAN is looking for an outstanding junior scientist to establish his/her own innovative research program in the field of immunology in cancer linked to the LabEx DEVweCAN program.

WSN granted for its ImmunoSarc project

The Liddy Shriver Sarcoma Initiative awarded a $340,400 research grant for WSN (collaborative study) on the immune system and the potential role of immunotherapy in sarcomas. The grant brings together investigators from Austalia, Canada, France and the United States in a two-year study of two sarcoma subtypes. The Laboratory of Excellence (LabEx) DEVweCAN directed by Dr Patrick Mehlen invites applications for Junior group leader positions in Research Cancer Institutions in Lyon from 1st of January to 30th of April 2015. 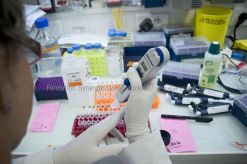 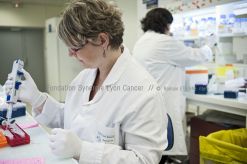 In the framework of objective 6 of the Cancer Plan 2014-2019 "Consolidating France’s position in personalized medicine / Generating and understanding big data", Synergie Lyon Cancer has joined with the CEA (France genomics), the Inserm, the French Institute of Bioinformatics, the Centre of Human Polymorphism Studies (CEPH), the Ligue contre le cancer and the Institut Curie, among others, to set up a national centre dedicated to genomics and the analysis of cancer data.

“At the beginning of June 2014 the 50th congress of the American Society of Clinical Oncology (ASCO) was held in Chicago, where more than 40,000 doctors and researchers went to present their results. Research against cancer is making progress. New therapeutic targets were unveiled, new therapeutic strategies explored, and new therapeutic paths are being studied. All this is very good news. Synergie Lyon Cancer is especially proud to have contributed its own small stone to this edifice.

The bioinformatics centre takes up the challenge

The “ICGC-TCGA DREAM Genomic Mutation Calling Challenge” was launched in 2014 by DREAM* to bioinformatics researchers all over the world. It focuses on the detection of somatic mutations using high throughput sequencing data: punctual mutations of a nucleotide, small insertions and deletions (several nucleotides) and chromosomal rearrangements (duplications, large deletions).

The article presents Epithelial to Mesenchymal Transition as a dynamic and reversible process that confers a high degree of “plasticity” to pre-cancerous and cancerous cells. EMT gives malignant cells the capacity to change from one state to another by permanently adapting to the environmental conditions encountered, at both the level of the primary tumour and that of the metastases on remote sites. The data presented place in parallel the different mechanisms through which the oncogenic activity of the inductive factors of EMT operates (called Twist, Zeb and Snai, etc.).