Founded in 2007 at the initiative of the government to structure research, the Synergie Lyon Cancer Foundation has benefitted from the vision and dynamism of its founders to provide researchers in Lyon with efficient and innovative tools, and contribute to the fight against cancer.

2006: a call for projects to make research more efficient

In 2006, the Ministry of Education and Research launched a call for offers to implement its program for new directions of research. The aim was to better structure French research, create clusters of national and international standing, and make research more flexible. Thus it created Thematic Research and Care Networks (RTRS) which bring researchers and clinicians to work together so that they can compete on the same level as the best research centres in the world. The aim of this grouping of scientists and clinicians is to ensure better and faster global patient management and medical progress.

Optimising the continuum between research and care in Lyon

To respond to the call for offers launched by the government and aware of the forces present in Lyon and their scientific excellence in the field of oncology, the Léon Bérard Centre and the Hospices Civils de Lyon joined their competences, by entrusting the coordination of their application file to 3 reputed experts: the clinician Gilles Salles and the researchers Alain Puisieux and Patrick Mehlen. Their scientific project for Synergie Lyon Cancer is focused on cancer escape, immunity and targeted therapies, all themes in which the teams of Lyon have a long history of expertise. The file was examined and accepted by an international jury in May 2007, thereby including the only project on oncology among the eight winners.

Synergie Lyon Cancer, a scientific cooperation foundation (FCS), was founded in July 2007. Its four founders, the CLB, HCL, Inserm and the Université Claude Bernard – Lyon 1, provided funds to the initial donation of €4 million received from the government following the call for offers.  The first Management Board was formed and chaired by the former Prefect of the Region, Michel Besse. The members of the Board included:

The Management Board relied on the Steering Committee to determine the Foundation’s strategic orientations.

Daily management is the responsibility of the Chairman, the Financial Manager, Marina Rousseau-Tsangaris and the General Secretariat of the Foundation.

A visionary and dynamic strategy

The Foundation called for sponsors and formed several long-term partnerships that still bear fruit today, including with the APICIL Group and the Caisse d’Epargne Rhône-Alpes. Their financial involvement led to the creation, among other things, of the chairs of excellence and, more generally, to the establishment of technological centres. This array of resources provides the scientific network of Lyon with the means to accelerate and finalise its works in oncology.

After the decease of Michel Besse, Alain Mérieux, a qualified member of the Management Board and a representative of the industrial sphere, was appointed Chairman.

Now chaired by Jean-Pierre Bizzari, the Synergie Lyon Cancer Foundation is recognised as a vital actor and facilitator of exchange between research and medicine. It is continuing to consolidate its assets by developing nationally and internationally to ensure that the means are available to conduct research of excellence. 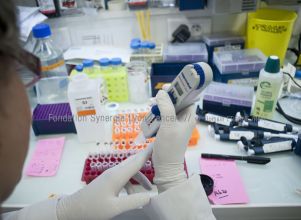