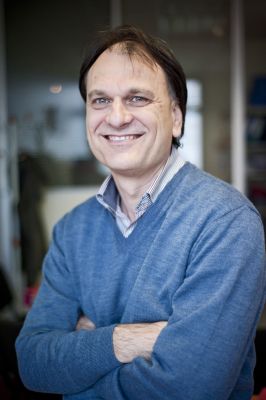 The current director of the Cancer Research Centre of Lyon (“Centre de Recherche en Cancérologie de Lyon” or CRCL)*, the Pr Alain Puisieux is one of the pillars of the Synergie Lyon Cancer Foundation. Pr Puisieux and his team have made vital discoveries on specific survival properties of cancer cells.

When the body detects cells that multiply abnormally or that present genetic modifications, it sends signals and initiates internal mechanisms leading either to cell death or to the prevention of cellular proliferation.“Such coercive fail-safe mechanisms are lifesaving: they can prevent the development of a lesion likely to develop into a cancer. We are currently interested in finding out how malignant cells manage to evade these mechanisms” explains Alain Puisieux. It was previously known that a mutation of the “tumour-suppressing” p53 gene could alter the signal leading to cell protection. The “Fail-safe systems and cellular plasticity” team of Alain Puisieux discovered that certain mechanisms underlying cell division and cell motility, generally active during embryogenesis**, were abnormally initiated during the development of certain types of cancer. “This phenomenon, known as  epithelial–mesenchymal transition (EMT), promotes the development of tumours and enables cancer cell migration leading to the formation of metastases.” Encouraged by “the conceptual revolution brought about by fundamental research-based targeted therapies”,  Alain Puisieux is now focusing on converting discoveries made on the mechanisms associated with EMT into perspective therapies for cancer patients “who can no longer show patience”.

To contribute, if only slightly, to an important public health issue

Alain Puisieux specialized in cancer research, since “it is an important public health issue and since from a scientific point of view, cell biology, particularly cell metabolism and deregulations, is fascinating”. Following on from his internship in Biology in Paris in 1988, during which he worked for the Immunochemistry Laboratory of the Institut Gustave Roussy (IGR) in Villejuif, he carried out his thesis on the p53 gene and on liver cancers at the Massachusetts General Hospital in Boston, USA. In 1992, he created, in association with Mehmet Ozturk, the Molecular Oncology Laboratory (“Laboratoire d'Oncologie Moléculaire”) at the Centre Léon Bérard (CLB) in Lyon, and received his PhD from the Paris XI University.  From the year 2004 onwards, he was appointed research director at the Centre Léon Bérard (CLB), and was subsequently, appointed director of the CRCL* in 2011. The latter includes 19 research teams focusing on understanding the mechanisms underlying the formation and progression of tumours, with the aim of developing novel diagnostic and therapeutic research strategies.

Even after 15 years working as a research director and after having supervised over 400 scientists, Alain Puisieux still remains a “fundamental research scientist at heart”.  Both cautious and enthusiastic, he hasn’t lost sight of his objective “to make a small contribution towards building a common venture” but remembers having experienced each one of his scientific findings as “ an extraordinary and emotionally powerful moment”. Full member of the French National Pharmaceutical Academy (“Académie Nationale de Pharmacie”), corresponding member of the French National Academy of Medicine (“Académie Nationale de Médecine”) and senior member of the French University Institute (“Institut Universitaire de France”), Alain Puisieux was made Knight of the Order of Academic Palms (“Chevalier de l’Ordre des Palmes Académiques”) in 2003. Lecturer in Biochemistry at the School of Pharmacy (“Faculté de Pharmacie”) in Lyon, he is also the author of over 150 national and international scientific publications.

**Different stages of development of the embryo