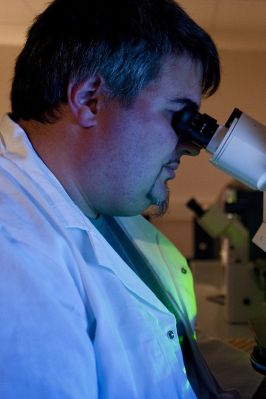 Thomas Wenner was recruited by the “Indolent B-lymphoid proliferation” team of the Laboratory of Molecular Biology of the Cell (LMBC) as part of a junior Chair of Excellence offered by the Synergie Lyon Cancer Foundation. There, he investigates genetic instability associated with certain leukaemia and lymphomas.

The genome of a cell exposed to internal stresses, such as free radicals, or external stresses, such as  UV radiations, can alter. Indeed, the genome can for example contain errors in DNA replication or “ruptures” of DNA strands. If the DNA proofreading mechanisms, which detect and repair lesions, fail, or if the lesions are too extensive, the mutations accumulate. This “genetic instability” is favourable for the virulent proliferation of cancers.

Thomas Wenner studies the effect of this phenomenon on the development of lymphomas and chronic lymphoid leukaemia (CLL), “blood cancers” resulting from the proliferation of B cells. Patients displaying such deregulations, also bear disruptions in the mechanisms maintaining the integrity of the ends of B cell chromosomes. Thomas Wenner now envisages therapeutic strategies based on his observations: “I work in collaboration with Ian Hickson, a British scientist, who developed a molecule, which specifically inhibits the BLM protein (a DNA helicase), associated with triiodothyronine (T3), in order to study the possibility of blocking its activity”.

The influence of genetic instability in haematological malignancies…

Thomas Wenner carried out part of his scientific studies at the Nancy University. After having obtained a Diploma of Advanced Studies (“Diplôme d’études approfondies” or DEA) in Microbiology in 1998, he did a PhD in Genetics on the instability and recombination of genes in a bacterial model. “Right from the beginning, this scientific field, more than any other, stimulated my brain cells”, the scientist admits. During his post-doc in the Centre for Chromosome Biology at the National University of Ireland, Galway, he studied the recombination of telomeres, or the region situated at the end of chromosomes, in vertebrate cells. He then finalised his fundamental research on human cells in the onco-pharmacology team at the School of Pharmacy, Reims. From the year 2007 onwards, he supervised a small research team at the Laboratory of the Foundation for Research in Cancer and Blood Disorders (“Recherche sur le Cancer et les Maladies du Sang” or RCMS), of the Hospital Centre of Luxembourg. After being inspired by his collaboration with a haematologist, he decided to conduct his work on samples taken from CLL patients and to focus on the active role played by T3 in this illness.

Thomas Wenner joined the Laboratory of Molecular Biology of the Cell (LMBC), supervised by Prof. Gilles Salles, in 2011, as part of a junior Chair of Excellence funded by the Synergie Lyon Cancer Foundation: “I find myself at the forefront of clinical research, of biology and of science in the field of haematological malignancies, with sufficient resources to work and with highly stimulating interactions”, he explains.

Here, I have a rare opportunity to conduct my fundamental research on samples taken directly from patients. I can work quite rapidly, since, owing to his transversal vision of the project, Gilles Salles can immediately evaluate the relevance of our proposals.